As mentioned in my previous article, An Overview of Exchange 2010 SP1, the latest Exchange service pack brings some new enhancements to the way Exchange Administrators will import and export data to/from PST files.

Note: All the information is based on the SP1 BETA released in June 2010 (version 14.01.0180.002). Please keep in mind that things may change by the time this reaches final release.

A bit of History

Exchange 2010 SP1 removes the requirement to have Outlook x64 installed by including an in-built MAPI provider. This is probably going to be one of the most welcomed additions to this improved piece of functionality.

The new Import and Export cmdlets

Let us now take a look at the new cmdlets available for the MailboxImportRequest and MailboxExportRequest commands and a small description for each:

There are a number of requirements that need to be met to ensure that the Import or Export process goes smoothly. These include:

Importing from a PST

We will now look at an example of how to import a mailbox from a PST.

When importing from a PST the cmdlet itself takes care of ensuring that subfolders are carried over too. By default, it also checks for duplicates in the target mailbox so that items will not be imported twice.

Below is an image showing Rachel Peach's mailbox prior to running the New-MailboxImportRequest cmdlet: 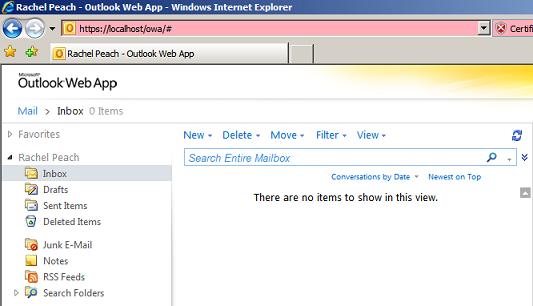 To import Rachel's PST into her mailbox, we can run the following command:
New-MailboxImportRequest -Mailbox "Rachel Peach" -FilePath \\win2008srv01\c$\PST\RachelPeach2010.pst

The image below shows Rachel Peach's mailbox with the new items that were imported from the PST: 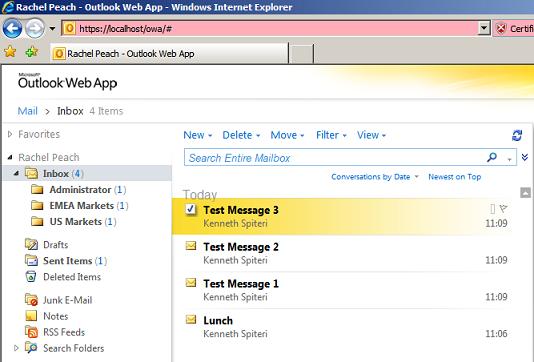 If you wish to import the e-mails into the Personal Archive of a user, specify the -IsArchive parameter at the end of the cmdlet, like this:
New-MailboxImportRequest -Mailbox "Rachel Peach" -FilePath \\win2008srv01\c$\PST\RachelPeach2010.pst -IsArchive

If you wish to specify which folder you'd like the e-mails to be imported to, specify the -TargetRootFolder parameter at the end of the cmdlet, like this:
New-MailboxImportRequest -Mailbox "Rachel Peach" -FilePath \\win2008srv01\c$\PST\RachelPeach2010.pst -TargetRootFolder "Imported"

To check the status of the import request, we can use the Get-MailboxImportRequest cmdlet:

Exporting a Mailbox to a PST

Finally, we'll look at how to export a mailbox to a PST using the New-MailboxExportRequest cmdlet. Below is an image showing Rachel Peach's mailbox prior to exporting the mailbox: 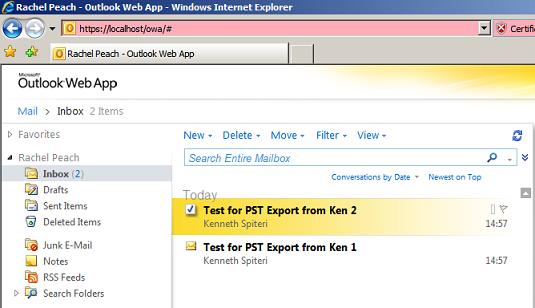 To initiate a mailbox export request, we will have to use the following command:
New-MailboxExportRequest -Mailbox "Rachel Peach" -Filepath "\\win2008srv01\c$\PST\RachelPeachMailboxJuly2010.pst"

We can check the status of this export request by using the Get-MailboxExportRequest cmdlet. The image below shows the RachelPeachMailboxJuly2010.pst in the C:\PST folder, as well as opened in Microsoft Outlook 2010: 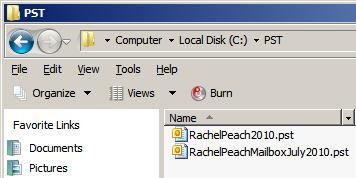 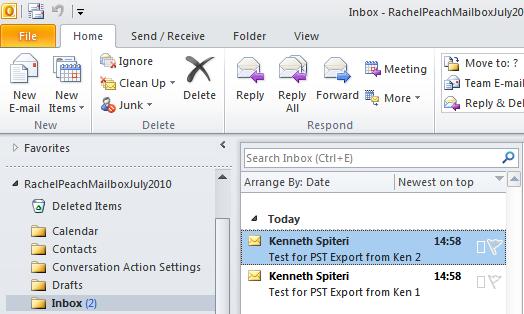 If you wish to export multiple mailboxes into a respective PST file, you can do so using a simple script, as shown below:
foreach ($mbx in (Get-Mailbox)) { New-MailboxExportRequest -Mailbox $mbx -FilePath "\\win2008srv01\c$\PST\$($mbx.Alias).pst" }

What we're doing here is looping through each mailbox and running the New-MailboxExportRequest cmdlet while using the mailbox Alias to compile a unique name for each PST.

As we have seen, the New-MailboxImportRequest and New-MailboxExportRequest cmdlets are going to make the Exchange Admins lives much easier. The fact that Outlook 2010 x64 doesn't need to be installed is a welcomed addition that should eliminate some of the frustration that was built around the Import-Mailbox and Export-Mailbox cmdlets in Exchange 2010 RTM.